Life in Prague while on a 10 week internship with the Leonardo da Vinci Programme...dogs included

I sat between two strangers on a plane to an unfamiliar country, wondering if the decision to give up my job, pack my things, and move abroad for ten weeks had been ill-considered. My uneasy thoughts were stunned into submission when the plane began its descent and through the window I could see a sprawling pattern of soft orange lights: Prague. My excitement continued to grow as our taxi weaved its way through the city towards our apartment. The closer we came to our new home, the more elaborate and awe-inspiring the architecture became. I couldn't believe my luck when the taxi stopped, just a couple of minutes’ walk from Charles Bridge, and we were invited into a picturesque, two-storey apartment with a view of the castle from the bedroom window. All doubts had left my mind about the Leonardo da Vinci Internship Programme and I knew I was embarking on an incredible adventure.

The other participants and I took our first Czech language class the morning after arrival and it left us a little dazed. I still find it confusing when abstract variations of my name are thrown around because it, like all nouns, has different grammatical cases. Once I began my internship, I quickly realised the importance of developing my language ability when working outside the tourist-trap. Even in the supermarket I found it virtually impossible to communicate at first, but this kind of intensive environment fosters learning and before I knew it I was able to hold my own with the locals. This came in very handy in my role as a reporter when I was asked to cover an exhibition opening, only to find that the artist and curator spoke very little of my first language. After a few fumbling attempts I was congratulated by the company for my efforts, and found that any attempt to integrate was greatly appreciated and acknowledged. 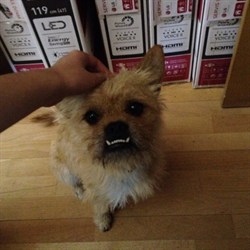 Life in the Czech Republic is incredibly different from England: casual attire is appropriate for any occasion, anything below half an hour late is on time, and any location is suitable for all the family. I first noticed this when I went to the interview for my internship and encountered two dogs, a new-born baby and a toddler in the office. My soon-to-be boss assured me that this was not the usual working environment, but on my first working day I received a shock when I looked under my desk to find a small, toothy dog peering up at me. I quickly became very familiar with Šiška, a sandy mongrel belonging to our editor-in-chief who spends most of his days in the office. I was surprised at a premiere one evening to find Šiška running along each row of seats with a tennis ball in his mouth.

This unspoken adoration of dogs permeates throughout the city and, as an animal lover, is one of the reasons I am so drawn to the place. It seems that a majority of the population has their own canine best friend to whom they are fiercely devoted. Along with Šiška, I was fortunate enough to become closely associated with a pug named Igor at the office. I have met countless pets of all sizes at galleries, bars, restaurants, supermarkets, and even one night on a club dance floor. For a people renowned as unaffectionate and relatively hard, it is a blessing to witness these loving relationships and this admirable level of respect for another species. My stories of dogs being left home for the day or tied outside shops in the UK are received as horrors by many of my friends who wouldn't dream of going anywhere without their furry shadow. I cannot recommend Prague highly enough to all, but I can guarantee a daily swooning session for any animal lover. I was startled by mine this morning when I stepped into the street to find six, pure-white, poodle puppies playing in front of my door.