One hour from Seville, there is a beautiful beach called Matalascanas. Swimmer or explorer, you can do both! Topping this off with amazing Andalusian food and a visit to El Rocío. The day could not have been any better!

As it goes when one is travelling in a hot country, a beach day becomes essential. A group of five of us decided to head south of Seville to Matalascañas. One of the ladies in our group had been the previous weekend and recommended it for it’s natural beauty, expansive size and proximity to Doñana National Park (great for a short hike in the morning). The weekend we went coincided with an annual pilgrimage to the nearby town of El Rocío, which I was also interested in seeing.

Packed with the essential towel, sarong, bathing suit, parasol and food for sustenance, I joined my travel companions and took the 08:15 coach from Plaza de Armas. Upon arrival an hour later and a desperate search for a loo amongst all of the closed restaurants, we wandered down a dirt road alongside the beach to see what was what. We discovered some wooden steps that appeared to lead to a mirador and after investigating the road a little more, we proceeded upward.

The choice to either relax on the beach for the morning or go for a hike beforehand presented itself, as the wooden steps actually led to a hiking trail beyond the pathway through the canopy of the forest. This is where our group divided and we three intrepid adventurers commenced forth amongst the vegetation. 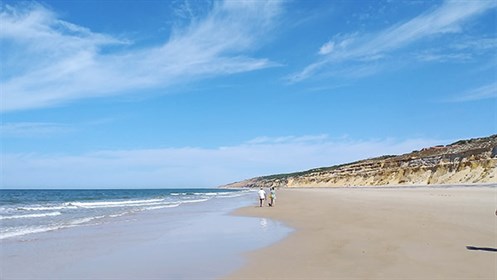 The sign marking the trails showed that we could expect a short easy walk, however, this proved to be only half true as the paths were completely sand! Shoes on or off, it was difficult to gain traction- not to mention all of the thorns and spiky bushes on the ground, threatening to impale our feet. By the time we had reached the top of the hill after frequently meandering off-path, we were both exhausted and overheated from the rising temperature. It was agreed that we had certainly earned our beachy idleness.

Regrouping, we settled down at the quiet end of the stretch for some sunbathing (sheltering under the parasol in my case) and swimming in the sea. This weekend’s weather had given us some much needed relief by graciously providing temperatures scraping the lower side of 30C. However, this meant that the water was quite cold and thus a lot of screeching, singing and goosebumps in our determination to become accustomed, and enjoy the waves.

Swimming makes for hungry work so, following a recommendation; we headed to Rancho Pichilin, a seafood restaurant inconspicuously sitting at the top of a cliff at the end of a sandy road behind some bins and cars. My companions ordered a garlicy squid and a pork sandwich and tentatively tucked in, whilst I ate my packed lunch with a drink, taking in the view of the sea. Satiated, we split again for our next adventure to El Rocío.

Every year, about a million people descend on the hamlet for a pilgrimage to see the Virgen Del Rocío statue. Along with the religious fervour, I am told that it is also yet another excuse to have a big party, as the Spanish love to do. We had never seen a pilgrimage before so, intrigued, we made our way to the information point to find out which bus would take us there. It was just our luck that everything was now closed and the nearby men offering us wine and langoustine tortilla to sit and chat with them, informed us that we had just missed a bus. It was getting late in the day and we would have wasted enough time having accidentally taken the long way back to the bus stop and waiting for the bus. So, fatigued and slightly disappointed, we gave up and went to get ice cream instead.To justify this decision, we rationalised that we had already experienced the colours, extravagance and party spirit of Feria de Abril, so we wouldn’t be missing out on much.

After making our selections from the numerous enticing sundae options offered at Cafetería Heladería Ciervo Azul, we ate in the town square before heading back to the beach to regroup. It wasn’t long before it was time to take the coach back home to Seville.

It would make sense that one would be wearied from a day of sun, sea, sand and...journeying… but as things go here in Spain, the day must end with more socialising over drinks. A number of our wider group gathered at a fellow intern’s apartment for conversation and storytelling until our beds summoned us home.