Living on an Australian Farm

Located in NSW is a little farm in the middle of nowhere, where I grew up. Two hours north-west of Canberra, and five hours from Sydney, the closest towns are a half hour away in opposite directions.

I live there with my parents, on and off. The only animals we have are about 50 sheep, which is a small number, generally speaking. At the moment the ewes are pregnant, with the lambs due sometime in late August/early September, in time for spring.  It is common for a ewe to have twins. One of the biggest threats to the lambs are foxes. To counter this, we keep a rifle in the shed for when it’s needed, but also put out fox bait. (I think the latter is more effective, which has nothing to do with anyone’s lack of shooting skills… *ahem.* Hi dad).

When it’s time to shear them (usually in the spring), I would have the job of squashing the wool down into the bales basically by jumping up and down on it, which was so much fun as a kid. I would get lanolin on my boots and the end of my jeans. The breed of sheep we have are excellent for meat, but do not produce good quality wool. 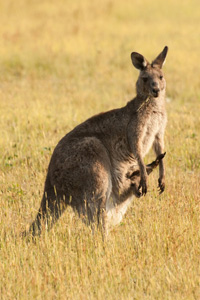 We have kangaroos in our backyard. To me that’s so normal that I find it a bit weird when people react so excitedly to it. But I just don’t know any different! There’s usually a big group of them in the paddock (about 30+) around sunset. And a few come right up to the house in the early morning. Joeys are really very cute, especially when they try to fit into their mothers’ pouch and they’ve got a leg sticking out at some odd angle. They can be quite comical.

Other wild animals in the area are cockatoos (your unwelcome alarm clock in the morning), and superb parrots, which have really gorgeous colours. We’ve had a goanna come right up to our front door. Because it’s a glass sliding door, let’s politely say I had a mild heart attack.

We’ve also set up nesting boxes for wild possums. There are tiny ringtail possums, brush tail, and sugar gliders in the area. It’s all part of a conservation program where we also have cameras set up to monitor their behaviour.

Due to popular discourse however, I do not know how to ride a horse or a motorbike, though some of my friends can. But I can crazily steer our old paddock basher across the property! (In style, of course).

We have a large hill that we hike sometimes; it’s only about 2 hours up and back. From the top, you can see the view of all the neighbours’ properties. It makes for a great bush walk. If we’re lucky, sometimes we can spot an echidna.

For roughly a decade, we lived through drought. Because we rely on tank water as our main source, this meant being careful with every drop of water. ‘Short showers’ has become a kind of mantra. There was a really low point when we had to buy water because we had so little of it. Our farm is not our main source of income, so we weren’t as badly affected as those whose livelihoods depended on their livestock or crops. Even though we’re no longer in drought now, we are still careful with our water and ask visitors to take care too.

Summers are HOT. It is common for a 32 degree Celsius day to be described as a ‘cool change’ after an endless slug of 38-40 degree days. There’s nothing you can do at that temperature. You just sit inside and drink a lot.

There are, of course, both advantages and disadvantages to living in a place like this. It’s great because it’s so quiet. The weather and scenery is especially beautiful in the spring time.

The great advantage can also be the disadvantage. Being disconnected from friends can be isolating. Every trip to town is planned to metaphorically kill three or four birds with one stone, as the cost of petrol can quickly add up.

Overall I would say I’m a country girl who loves the city. I need a bit of both to keep myself sane, (hence why I’m now in London!).

If you’re considering visiting Australia, why not check out our programmes? The Paid Work Outback Experience allows you to ride stock horses and do off road bike riding, so you’d be two steps ahead of me already!

Otherwise there is the Conservation Volunteering & 3-day City Break, which would allow you to work within the beautiful Australian bush lands and see the native wildlife.